The group entrusted the mission to the students of the School of Visual Communication (ECV).

Between mastery and creativity 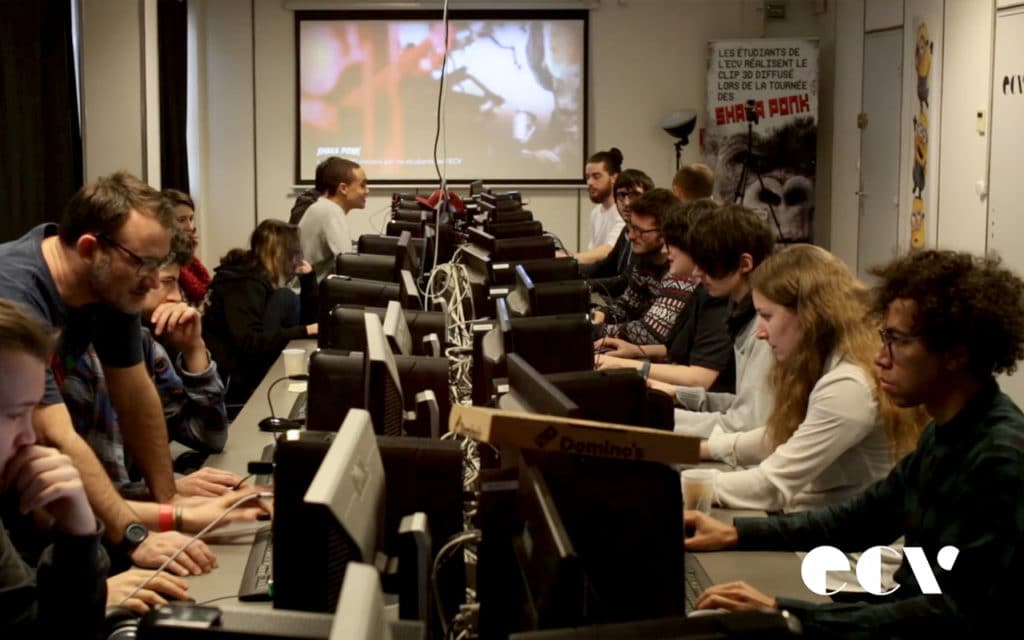 The band had previously worked with the school’s students on their 2013/2014 tour.

The added value of Shaka Ponk’s concerts is the game of sounds and lights, with monkeys, recurring characters of the clips and completely belonging to the DNA of the group.

The first clip, which lasted eight minutes, was to animate a virtual gorilla, who was performing a “battle” with the drummer of the band. This high-precision work, both in a technical and synchronized dimension, required the fifteen students then mobilized nearly three and a half months of work in a tense flow, to meet the needs of the group. A work appreciated by the concert spectators, but also members of Shaka Ponk, who decided to return to ECV for their new project, more ambitious, more animated, bigger.

A technical challenge, the added value of each concert

For the “Monkadelic Tour”, the virtual gorilla is making a comeback, but his world is changing markedly, with great challenges for both the group and the students. Indeed, the new clip lasts fifteen minutes, and required a year of work for the students of Bordeaux, helped by the campuses of Paris and Lille. The group also invested a lot throughout the project, accompanying the students in the choice of each visual, to get the most realistic rendering possible. The work of the characters is based on a sharp 3D modeling, with the realization of several models corresponding to the expressions of each, for an optimal rendering corresponds to those of a human. In addition to the gorilla, the students, at the request of the group, revived six renowned artists, like Michael Jackson or Kurt Cobain, modeled for the concert. The group also chose to use methods that the ECV school proposes, such as motion capture, to keep the characters alive with fluid and natural movements. In a Parisian studio, Mocaplab, specially designed for this purpose, people wearing suits with sensors spread throughout the body move and realize the movements that the different characters will make. In this case, by mimicking the movements made by a drummer, all synchronized with the sound, for the most realistic result possible, as if the character was real and contributes to the concert.

This is not ECV’s first experience in partnership with artists. The school worked, in addition to Shaka Ponk for the second time, with Mathieu Chedid, or Tryo, personalities of French song. The school wants to accompany artists who offer quality, regardless of whether they already enjoy a high profile or not. Quality is what ECV wants to offer its students throughout their career, including the intervention of personalities or companies with a strong experience in the various specciasuch as Ubisoft, or Dreamworks, with an international reach.

Shaka Ponk’s tour, which began in February, will give a concert in the new Bordeaux Metropole Arena in Floirac on March 6, where all the students who contributed to the making of the clip are invited to discover the result live. The band will then continue its tour until the end of April, all over France and in the neighbouring countries, and will finish with the festivals until August 20.

AVE the laboratory has nothing to envy to the great